After few weeks of absence… And following our blog series: spot a coral, spot a critter, we will check the cute little coral bubble shrimp… It’s a fav of UW photographer and it’s pretty easy to spot, if you know where to look at.

In the bubble coral family, there are basically 3 species of corals which are very easy to differentiate and recognise. They are all either brown or green colour. Some of them are literally fluorescent green. Plerogyra sinuosa is the most famous, with very large bubbles, a thick flabello-meandroid skeleton. The skeleton is wide, with very large obvious septa, and wide valleys that separates the lined polyps.There are 2 type of Plerogyra sinuosa, one with very large egg shape bubbles, and one with smaller drop shape bubbles. We don’t yet why they can produce 2 different types of vesicles, sometime next to each other.

Plerogyra symplex, also have quite large bubbles, but the skeleton is branching which makes it easy to tell apart from the 2 others.

The last one is the Rice Bubble Coral Physogyra licheinsteini, that have the smallest bubble, a massive flabello-meandroid skeleton and no valleys to separate the polyps.

During the day, the bubbles are extended, as they are used to culture in optimal conditions Zooxanthellae symbiotic algae under intense sun light. During the night, the bubbles are retracted and usually the coral is into feeding mode, with all the tentacles extended to catch as much food as possible.

Sweeping tentacles in full power at night… The slow war is serious business!

Usually a quick inspection of the coral polyps, allow to spot the shrimp. Look for some slightly deflated vesicles, with a pair of purple or red antennae sticking out. Often the shrimps live in pairs among the corals. if the vesicles are deflated, then the shrimps are really easy to spot, they often stay in a small cavity inside the skeleton. If the Coral is small, then they’ll be sitting right in the middle. If the coral is a big head, usually on the lower side of the coral, the least exposed to predators. usually the shrimp stresses the corals, so the tissues are retracted and even the skeleton can be exposed at this particular spot… But usually the vesicles cover the area pretty well.

Like all coral associated shrimps, the limit between, parasitism and mutual symbiosis, is pretty thin. Probably that the shrimp, in exchange of food and shelter, helps fight off some small parasites, such as flat worms, coral eating nudies, some sponges or algae that would compete with the corals. or even clean the coral off any detritus, sand…

Vir philippinensis is the most common and can be found in all the Indo-pacific area. It’s entirely transparent but some thin purple lines along the all the legs and articulation. A Blood vessel is often obvious through the back, and all internal organs can be seen through the completely transparent body. Developing eggs can also be spotted on the bigger females. Eyes are always obvious in these species, they are white and black, seating on top of a stalk, lined by a blood vessel, feeding them.

A pair of Vir philippinensis, the bigger female carry the eggs.

A pair of Vir philippinensis, the bigger female carry the eggs.

Vir philippinensis outside at night, while the feeding tentacles are out

Vir colemani is a bit more difficult to find, occurring in North Sulawesi and the Philippines. It’s very similar to V. philippinensis, except that only the joints on the legs and the tip of the tail are purple, so they’re missing the purple lines. All the rest is similar.

Vir longidactylus, is the most elusive, and quite hard to find. Like the other members, it’s mainly transparent with a red lines in the centre of the abdomen, the legs and the antennae. It’s yellow in between the eyes, to disguise them. Definitely the holy grail of Vir ! 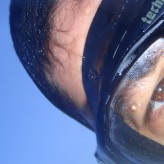 0 0 0
Previous ArticleDiving With Her Deepness Dr. Sylvia Earle - And Euphyllia Reef We Must Protect!
Next ArticleGet Ready for Rao! Scuba Diving in North Maluku Indonesia