The NERD was a very ambitious design for an all in one dive computer that rests in your field of view and Shearwater is pushing the concept further with the NERD2. With its second generation, the NERD2 ditches the remote battery and is now even more self-contained.

With its smaller footprint and reduced size the NERD2 can now rest even more comfortably near your mask, attached to the hose coming into your second stage regulator. There’s also a CCR mount for Fischer and DiveCAN rebreather units which tap into your system’s oxygen sensors.

For us one of the standout features of the NERD2’s design is the built-in ‘3-axis tilt compensated digital compass’; it might be a mouthful but this just means that not only can you see all your dive statistics at a glance but you also can navigate your way in dark water and night dives just by looking at the NERD2 display. Although the battery is now integrated into the NERD2, Shearwater claims that it can get you a respectable 18 hours of diving on a single charge.

At a starting price of $1500 the NERD2 is not going to dominate the dive computer market of wrist and console models. But for dedicated underwater photographers that have large two-handed camera rigs, being able to check your computer without letting go of your camera means you won’t miss the money shot when it comes into frame. [Shearwater] 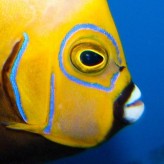